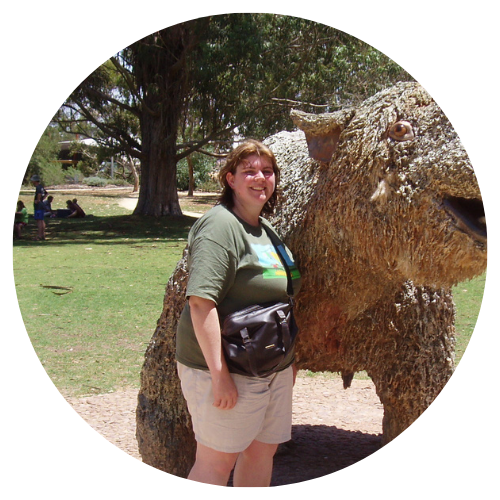 Here’s one story of how a simple dinner party conversation turned Bronwyn into a published author.

Bronwyn has penned a children’s book about a day in the life of the diprotodon –a 2,700kg megafauna. The non-fiction picture book, illustrated by Andrew Plant, is set to be published by CSIRO Publishing in 2023.

Bronwyn was first encouraged to consider applying for an MS Go for Gold Scholarship by friend, Sue Donaldson, and MS Nurse, Helena.

“I’ve always been aware of the need to have something to fall back on. Something that I can do even though I was sick [with MS],” says Bronwyn.

When wondering what dream she should look to achieve with the scholarship, a friend reminded Bronwyn of a dinner party 7 years earlier when she had first moved to Canberra.

At the party, friends discussed the question ‘If you weren’t a public servant, what would you be doing?’

The close friend reminded Bronwyn of her answer: without a doubt if she wasn’t a public servant, she’d be writing children’s books.

In following her dream, Bronwyn bought a computer. She also used the scholarship funds to start going to the ACT Writers Centre at Gorman’s House which involved a tutorial with an author.

“The person conducting the first course was Sue Whiting, a well-known published author. We were all first-time writers and Sue was inspiring,” says Bronwyn.

From that initial workshop, four of the participants formed the Canberra Children’s Writers Group.

The group attended a NSW Writer’s Centre speed dating with publishers, met regularly to explore their love of writing and even applied for a Australian Literary Arts Grant.

Sue Whiting, the tutor from the original class Bronwyn took with her scholarship funds, became their mentor.

“Sue Whiting asks what is our passion project that we want to bring to life. I explained how I fell in love with the diprotodon.”

Visiting the World Heritage listed Naracoorte Caves as a primary school student, Bronwyn learned about the stalactites and stalagmites.

“We didn’t know about megafauna at the time,” says Bronwyn.

Returning to the caves as an adult, Bronwyn learned about the diprotodon.

“I did all this research I spent a great deal of time looking at the diprotodons. When I first went to the cave, I didn’t know that much about the animals. When I heard all the stories about the megafaunait was like music to my ears.”

“I was first told that the diprotodon was carnivorous. Imagine a wombat the size of a black rhinoceros wanting to eat meat. That’s when I fell in love with it.”

“That’s since been found to be wrong. They are not carnivorous. Australians are good at story exaggerations like dropbears,” she jokes.

Her book is non-fiction and shares factual knowledge about the life of the diprotodon.

Brownyn studied law at Flinders University and used her alumni status to connect with Emeritus Professor Roderick Wells, known for helping bring forward the importance of the Naracoorte Caves and getting them heritage listed.

“As a girl from Kalangadoo, I knew Flinders University had a relationship with Naracoorte Caves.”

For Bronwyn, everything is connected.

Her university studies led to an amazing scientific connection lending expertise to her book.

Her dinner party conversation led to a dream being achieved.

Her MS Go for Gold Scholarship led to lifelong friendships being developed with her writing pals. 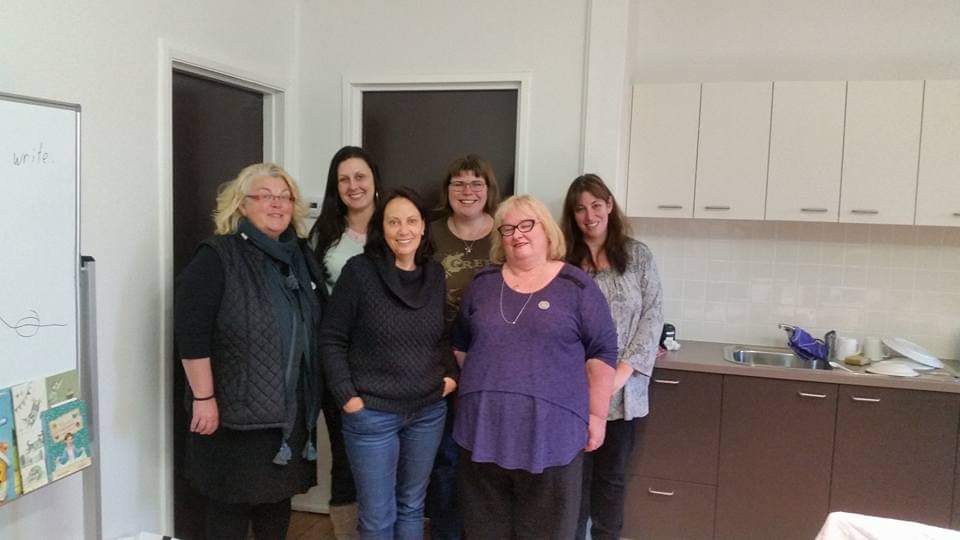 Bronwyn says, “I wrote the book with Sue and 5 years later I managed to have it accepted by a publisher, CSIRO Publishing, and it is going to be published next year. I’m also already planning a second book.”

It’s not just becoming a published author that Bronwyn achieved out of the MS Go for Gold Scholarship. The connections she formed at the tutorial the scholarship paid for helped her form the Canberra Children’s Writers Group, a group of people she treasures.

“It provided me with a great deal of belonging because when I moved to Canberra we didn’t have anyone here,” says Bronwyn.

“MS Plus, in all it’s forms, has always been a part of my life.”

Bronwyn’s mum was diagnosed with MS when Bronwyn was in year 3.

“When mum was first diagnosed my parents and I were educated on what to expect, what MS was and I became a fundraising champion in my small school with the MS Readathon.”

For Bronwyn, it all began with nocturnal epilepsy.

“From being awake to heavy sleep, that was the scary time when I’d have fits. I’d be thrashing around beating up my husband.”

“It would feel like I’d run a marathon because of what my muscles had been doing during the fit.”

To our fundraisers, Bronwyn wants to say thank you for making her dream possible.

“Thank you for the opportunity to follow and rediscover a dream I’d forgotten about. To allow me to continue to provide something of value as part of my ongoing career as an author is incredible.”